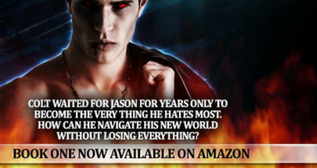 There is an HFN ending, but the book is the first in a continuing series.

The next book will be available for review January, 2018.

Colt Jager never knew what happened to the parents who abandoned him, and he never cared–until he inherited their ghoulish secret.

Raised as a human who had no idea he was anything but a blue-collar construction worker until the night of his 25th birthday, Colt finds it hard to adjust to life in the Kinship, a hidden world woven discreetly into human society.

After a grisly encounter with his true nature, Colt meets a family of human-friendly ghouls who teach him that there’s a way to be inhuman without being inhumane. But things get complicated when he realizes that the « wolf attack » responsible for killing his boyfriend’s brother was actually committed by a ghoul on the hunt.

When an elite family of especially monstrous ghouls called Alphas threatens the man he loves, Colt will have to lie to Jason to keep him safe. Can a predator ever truly be a hero, or will the man he loves become his prey?

« You could help people lots of ways. I just don’t see why you have to pick the one that could get you killed. »

« I’ll be pushing papers for the DA, not infiltrating a crystal meth ring,” Jason shot back.

The argument had been brewing for some time, and Colt knew that he didn’t stand a shot at winning now that they’d finally gotten around to it, but he could hardly take the news that his boyfriend had just signed up for the most dangerous job in the city sitting down.

“And what happens if some psycho gets pissed at your boss for putting him in jail and you get caught in the crossfire? »

« Then I’ll have a hard time holding water. »

« I guess I just don’t find the very real possibility of losing you all that funny. »

Colt clenched his jaw. « Why is this so important to you? Why does it have to be this field? »

Jason settled back against the couch with a heavy sigh. « You remember how it was when Luca was killed. We all spent months reeling, grasping for something to make sense of what happened. I’d listen to my dad reaming out Fish and Wildlife reps for hours on end, demanding reports and explanations for how a lone wolf in an area where there wasn’t supposed to be anything other than coyotes and fisher cats just showed up and killed his son. It made no sense, and we desperately needed it to, even though we knew logic wouldn’t bring him back. It wasn’t until I got older that I realized there are some things in this world you just can’t make sense of. Things that you can’t explain no matter how hard you try, and even if you could, it wouldn’t change anything. But there are tragedies that can be explained, and there are families out there who suffer needlessly until someone finds the answers. I want to be one of the people who finds those answers, Colt. I don’t want anyone else to feel the way my family did if it can be helped. »

Colt’s stomach churned as Jason spoke. The conviction in Jason’s voice alone was enough to soften his anger, but more than that, it was the doubt it caused in Colt that unsettled him.

What if it hadn’t been a wolf that attacked Luca, after all? Colt had never questioned the official narrative as a preteen, but knowing what he knew now as an adult, “animal attack” rang as nothing more than a callous euphemism. If one of his own kind had killed Luca, keeping this secret about his own identity was more than just a lie. It was a betrayal.

“I do.” Colt cleared his throat. “I’m not gonna pretend like I’m happy about it, but I get it. If this is what you want, I won’t try to stop you, but I am going to ask you to be careful.”

Jason smiled, leaning in for another kiss. “And that’s where you’re different from my family.”

“I would hope I’m different in a few more ways than that,” Colt teased, pushing Jason back against the sofa.

Colt shuddered. “You know how to paint a picture.”

“I could paint a better one if you come camping with me,” Jason purred, winding a strand of Colt’s hair around his finger. “Please?”

Colt sighed. “How am I supposed to say no to that?”

“You’re not,” Jason whispered against his lips.

Colt moaned as Jason’s knee slipped between his thighs and the friction of their jeans made his grinding pure torture. Colt reached underneath Jason’s shirt, tracing the lines of his abs down to the sharp cut of his hips. His hand drifted lower just as the phone on the coffee table buzzed.

“They’re not giving up,” Jason gasped, breaking the kiss. “Maybe you should answer it.”

“Fuck whoever it is.”

“What if it’s the secret girlfriend you’ve been running off with lately?” Jason asked in a teasing tone. Colt could tell there was a hint of genuine suspicion in it.

Jason gave his shoulder a playful shove and reached for the phone. “Hello?” His face went blank and Colt sat up sharply. How he hated technology. “No, sorry. I’ll put him on.” He pushed his finger against the speaker and whispered, “It’s the Sheriff.”

Colt winced, taking the phone. “Sorry. I should take this.”

Jason’s eyes were full of questions, but he said nothing as Colt stood and crossed the room, pressing the phone to his ear. “Sheriff Venson. Hi. What can I do for you?”

“I assume that was the mysterious boyfriend Susan’s always speaking of,” Roland said in a dry tone. “Does he know?”

“Not at all, sir. Did you need me to answer any more questions about Chuck?”

That seemed to satisfy Jason’s curiosity, or at least convince him to pretend like he was interested in his own phone.

Roland chuckled. “A word of advice. If you care about him, keep it that way.”

“That’s what I was planning on.”

“I won’t keep you. Just wanted to check in and make sure Wilbur hasn’t tried contacting you again.”

“No, I haven’t heard anything but I’ll let you know if he calls.”

“Good man, Colt. Keep your head down,” the Sheriff said before hanging up.

“That was about Chuck?” Jason asked, leaning over the back of the couch.

“Follow-up?” Jason frowned. “They questioned you about Chuck’s death?”

“For an animal attack?”

Colt could see the wheels turning in Jason’s head and knew he needed to stop the investigation train before it ran off the tracks. “Yeah. I guess his wife is insisting on it. Can’t bring herself to accept what happened,” he said, cringing internally. He felt like scum before the words were even out of his mouth.

“Yeah. So,” Colt said, clearing his throat. “Where were we?”

“I was trying to convince you to go with me on that camping trip.”

“If your mind’s made up, so is mine,” Colt said with a shrug. “I’m not letting you go out there alone.”

Jason scowled, but there was more amusement in his gaze than irritation. “I’m not sure I like the new caveman Colt.”

“Get used to it, he’s not goin’ anywhere,” Colt half-teased, leaning over the couch to kiss Jason. “Especially not if you’re working for the DA.”

“I haven’t even gotten the internship yet.”

“Oh, you’ll get it. You get everything you want.”

Jason grinned. “That’s very true. As a matter of fact, there’s something I want you to give me right now.”

It just so happened to be something Colt was more than willing to give.

Kat Bellamy is a nonbinary author of MM fiction and urban fantasy. Ghoulish is their debut series. When they’re not writing, they spend their time watching bad horror movies and losing board games.

Enter the Rafflecopter Giveaway for a chance to win a $10 Amazon gift card.

Stories That Make You Smile INTERVIEW 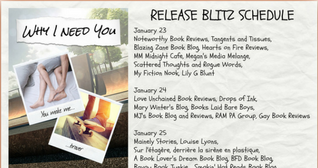 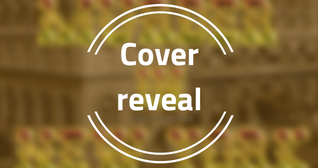