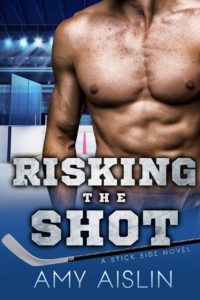 Risking the Shot by Amy Aislin

Synopsis for Risking the Shot:

A chance at making the playoffs? It’s a dream for NHL forward Taylor Cunningham that just might come true. If he can keep his eyes on the ball—ahem, puck. And study for midterms. Dakota Cotton, eleven years his senior, isn’t just a distraction, though—he’s everything Tay’s ever wanted.

Dakota has no interest in introducing someone who might not stick around to his four-year-old son. Been there, done that, with the divorce to prove it. But there’s something about Tay that hits all of the right buttons and has him wanting to take a chance.

As things heat up between them, and the pressure to succeed hits an all-time high, will they risk a shot at happiness or choke?

“Don’t judge if I fail,” Dakota warned, pointing a finger at him.

Tay mock gasped. As genuinely as he could, he said, “I make no promises.”

Dakota was shaking his head at him. In the next moment, he whipped a slap shot into the back of the net.

“Wow, Daddy!” In his excitement, Andy hopped, unbalancing himself and landing on his butt. He was on his knees in an instant, clapping. “Again!”

Dakota skated backward, gaze over his shoulder so he didn’t hit anyone, and stopped just beyond the face-off circle. Seemed like he was giving himself a bigger challenge.

Never in his life had Tay been turned on by watching his teammates play or practice. Watching Dakota set up a shot? Knees slightly flexed, torso held straight? Drawing his stick back, his leather jacket pulling tight across the shoulders? Concentration lines furrowing his brow, pink lips set in a determined line? Tay was much more turned on than the situation warranted, but fuck. Why did Dakota have to be so damn sexy?

Dakota’s next shot joined the first. The grin that lit up his face did way more than warm Tay’s belly.

Get your mind out of the gutter, Cunningham. There are kids present.

“What do you think, And—?” Dakota cut himself off when he noticed Andy making snow angels on the ice. “Yeah, that looks about right.”

Dakota snuck an arm around Tay’s back. “Can I get you a beer?”

“Yes.” Head falling back, Tay groaned. “Also no. I really do need to go. I’ve got an early flight tomorrow and I want to get a reading assignment done tonight.”

“Right, I remember now,” Dakota said as Tay turned toward him, hands coming up to grip his biceps. Dakota’s went to Tay’s hips. “West Coast games.”

“Guess I won’t invite you to dinner tomorrow then.”

That gaze came back up, pleased and surprised. “Were you going to?”

“Well.” He brought Tay in closer, thigh-to-thigh, chest-to-chest, his blood heating when Tay’s hands inched up his arms and around his neck. “Andy wanted me to.”

“Oh, Andy wants me to come to dinner, huh?” Tay’s lips were a mere inch away now, slightly curved upward, amusement alight in his eyes.

They were smiling when their lips met. Tay tasted slightly like the one beer he’d had with dinner and like something uniquely Tay. Fingers swept into Dakota’s hair and gripped, making him exhale sharply into Tay’s mouth. Thank fuck Tay had stayed.

Dakota’s arms crept around Tay’s hips, one hand sneaking under Tay’s sweater to run over his back, the skin smooth and warm. The other gripped a handful of Tay’s ass, bringing him that much closer and nudging their semis together.

Tay made a sound in the back of his throat, guttural and deep. It reverberated into Dakota’s bones and outward to the tips of his fingers. They were evenly matched in height; still, Tay rose up onto his toes as if that could bring them even closer together.

A shiver wracked Tay’s whole body. Gentling the kiss that had gotten more heated than Dakota had anticipated, he pulled back and swept his thumb over Tay’s wet lips. “Okay?”

“’Cause my kiss was that awesome?” Dakota teased.

Tay let out a short laugh and cupped the side of Dakota’s neck. “It was pretty epic as far as first kisses go.”

Before Dakota could ask what was actually amazing, Tay kissed him again, tongue curling into Dakota’s mouth. Dakota moaned, inserting a thigh between Tay’s legs.

They kissed until Dakota’s mouth went dry, until his lips were sore. Until Tay lost his balance, clutching at Dakota’s shoulders with a laugh. He tucked his face into Dakota’s neck, the gesture so sweet and trusting that Dakota smiled against Tay’s temple.

Pulling back, Tay searched his face. For what, Dakota couldn’t tell.

“Can I take you out sometime?”

Entranced by Tay’s smile, Dakota cupped his cheeks. “On a date?”

“Mm-hmm.” A quick kiss landed on Dakota’s lips. “And then for our second one, maybe we can take Andy with us and go bowling or something.”

Tay was already looking forward to their second date?

More importantly, he wanted to include Andy too?

Win one of two signed paperback copies of Risking the Shot, plus author swag. Open internationally. 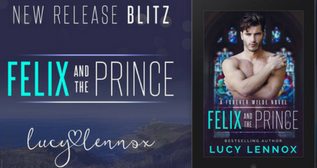