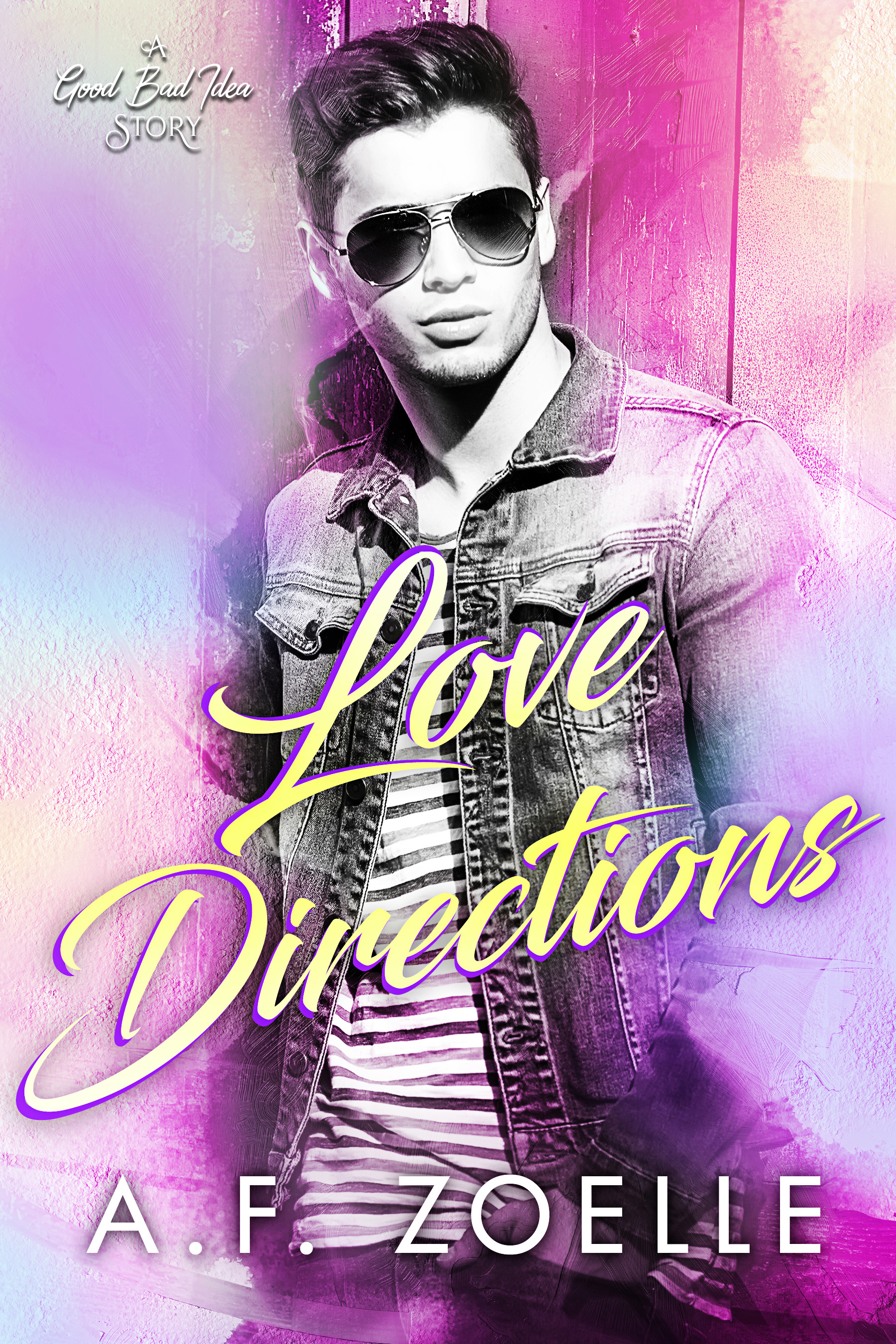 Can a chance meeting lead to true love? I sure hope so, because I’m falling hard and fast for North. I’m normally too shy to be attracted to a playful flirt like him, but he’s full of surprises that bring out the best in me. Even though we’re nothing alike, he’s everything I never knew I needed.

Maybe it’s silly to feel like the cosmic universe conspired to bring us together, but North makes me want to believe in the impossible. After all, it would be stupid to run away from love when all signs point to him being the one, right?

To say I’ve lived a strange life is a massive understatement. I’m used to weird things being the norm, but even I never expected to fall in love with a sweetheart the first time I meet him. Elias makes me feel all warm and gooey inside like a hot brownie. If I get lucky, maybe he’ll want a bite. And if I’m really lucky, he’ll want to come back for seconds, thirds, fourths, and forever.

I know we just met, but is it too soon to plan for a lifetime of canoodling with Elias? Shockingly, I don’t mean that as a euphemism for once.

Love Directions is the fifth book in the Good Bad Idea series. This novel features a shy/flirt, instalove, opposites attract romance. Full of cute sweetness and sexy fun, every story ends with a satisfying HEA and no cliffhangers. Each book can be read as a standalone or as part of the series in order. 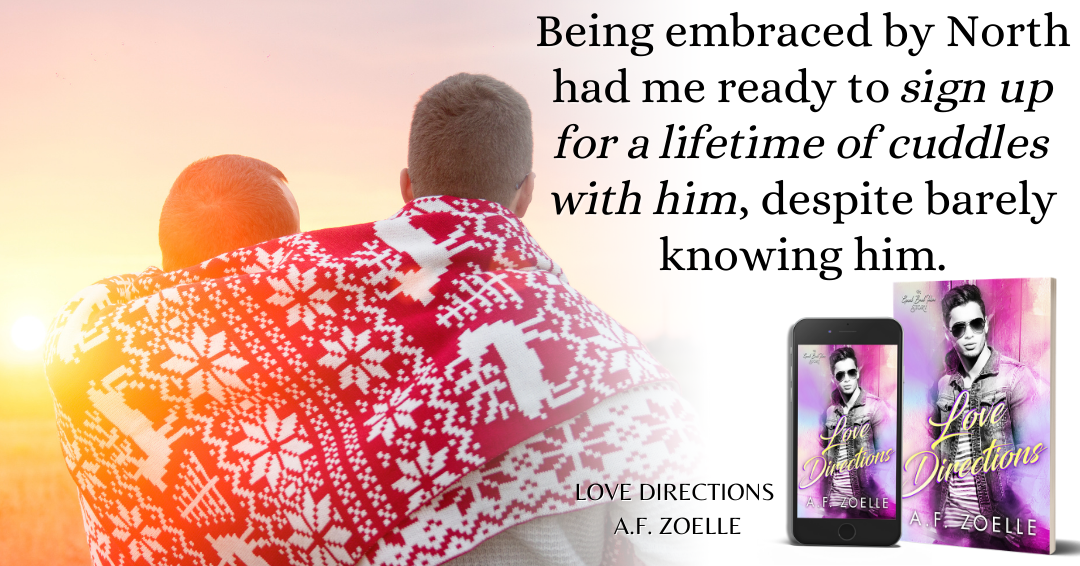 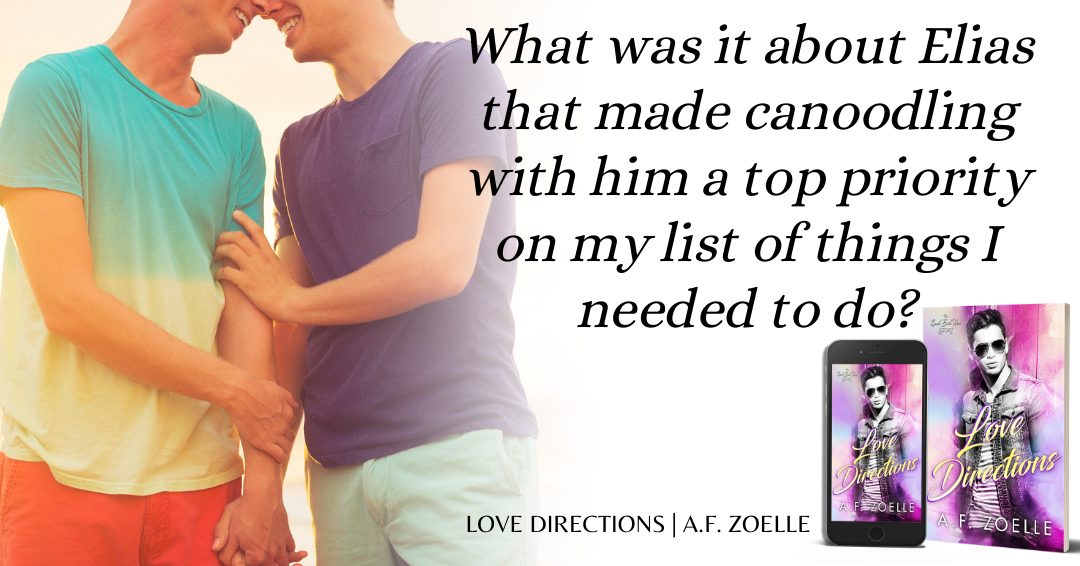 North shook my hand as he introduced himself, sending currents zinging through me as we touched. “I’m North Easton. Nice to meet you, Elias.”

That was quite an interesting name. “North Easton?”

“Yeah, and my twin is West Easton. There isn’t a joke about that we haven’t heard.” He grinned, even though he was probably sick of everyone having the same response. “If you think that’s bad, my mom has a cat called Woof. My theory is she’s overcompensating for being named Linda.”

He said it with a straight face, but I couldn’t believe him. “You’re joking, right?”

“I wish I was. When she was a kid, she had a Chihuahua named Meow.”

It was so absurd I had to laugh. “Now you’re just messing with me.”

North pulled out his phone and opened his group text with his mother and sister. He scrolled up a bit to a picture of a very regal-looking gray Siamese cat wearing a gold crown and white fur-lined purple velvet cloak. The texts under it made me snicker.

Mom: Fine, he commands you to stop being a smart-ass.

North: Good luck with that. Does Lord Woofie have a specific time in mind?

The conversation was so delightfully weird. “I bet her next cat’s name is Mouse.”

I raised my drink in a toast. “Congratulations, you’re officially the most interesting person I know now.”

“I’m honored.” He clinked his glass against mine. “So, what’s this I hear about me being your stranger?”

As he drank his cocktail while watching me, I found myself tongue-tied. Thankfully, Red answered for me. “His horoscope said he would meet a stranger that would change his life today. It also suggested that he should be open to the possibility of love, hint hint. Mine said I should play Cupid, so this seems like the perfect trifecta to make magic happen.”

It was embarrassing having my horoscope habit being revealed. I hurried to justify my interest. “Horoscopes were my mom’s thing.”

North studied me, his gaze piercing through me as if he could see all my secrets somehow. I felt exposed but remained silent as I waited for him to respond. He took another sip before he shocked me. “You must be a Virgo.”

I blinked at him in disbelief. “How could you tell?”

His cryptic smile did funny things to my heart. “I’m magic.”

“If you’re so magical, what am I?” Red challenged.

“Oh, you’re definitely a Taurus. There’s no question about that.”

His accuracy was uncanny, further intriguing me. “Why do you know that?”

“I told you: I’m magic.” He stated it with so much confidence, I almost believed him. Who was this guy? 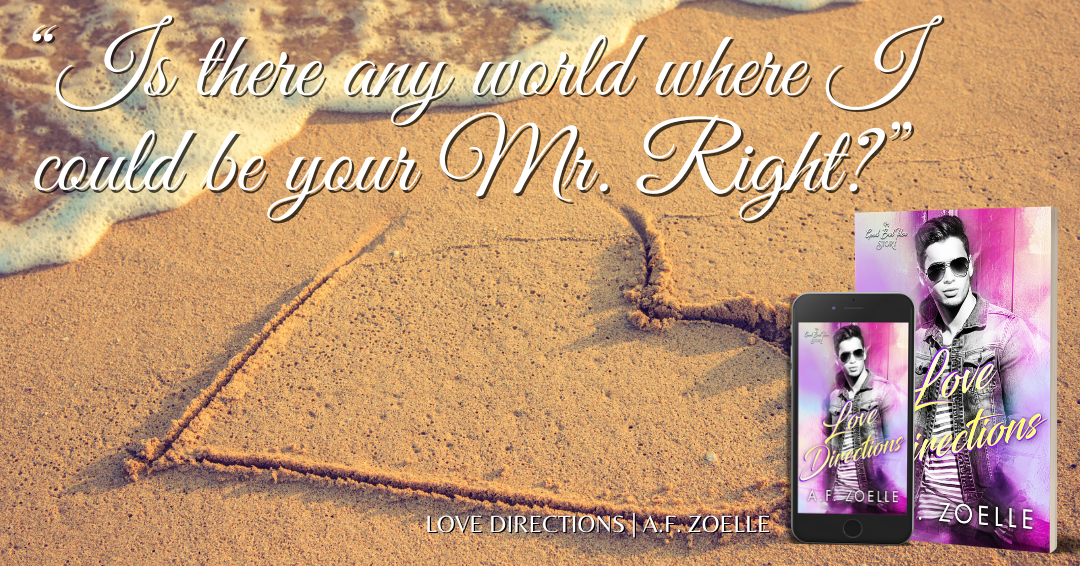 To celebrate the exciting release of Love Directions, we are giving away 2 e-sets of the A Good Bad Idea Series so far (5 books)!

Check out the rest of the 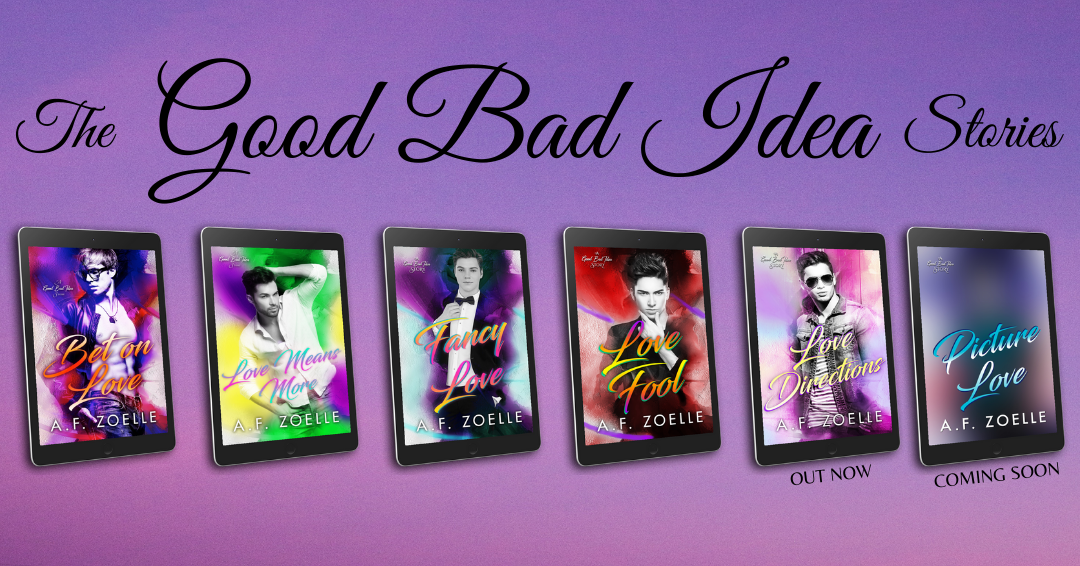 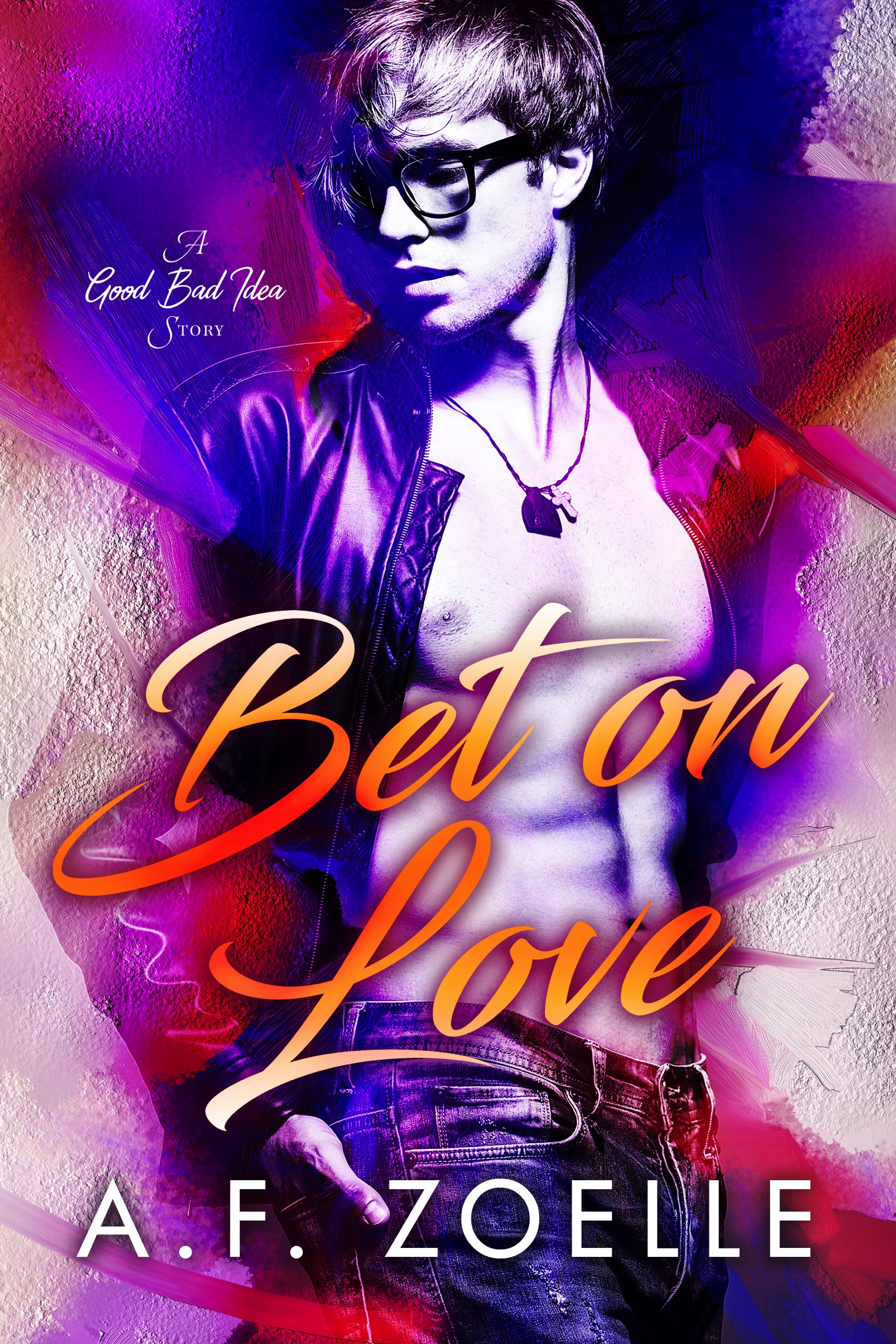 After my bachelor party, I expected to wake up with a hangover. I never imagined I’d wake up in bed with a husband two days before my actual wedding. Realizing I’m straight and married to my best man sobers me up real fast. But nothing could have prepared me for discovering I desperately want to consummate my marriage with my best friend and spend the rest of my life with him.

What are the odds that my bad idea ends up being the best thing to ever happen to us?

Rhys may legally be my husband now, but that doesn’t mean he’s mine to love and cherish for the rest of our lives. We’ll get an annulment, then go back to being just best friends. But all those feelings I’ve suppressed since we shared our first kiss as teenagers have been stirred up, forcing me to confront the fact that I wish our marriage was more than a mistake.

How do I tell my best friend I want a second chance to be his husband for real?

Bet on Love is the first book in the Good Bad Idea series. This novella features a friends to lovers, second chance, bisexual awakening romance. Full of cute sweetness and sexy fun, every story ends with a satisfying HEA and no cliffhangers. Each book can be read as a standalone or as part of the series in order.

I’ve dropped at least 1,846,957 hints that I want to be more than Augie’s best friend. Despite my best efforts, my reputation as a straight playboy means he’s not picking up what I’m putting down. If I’m going to win his heart, I’ve got to get creative.

Maybe if I show him what an awesome fake boyfriend I am, he’ll want me to be his real one?

Is it possible to turn my fake boyfriend for a night into my real one forever?

Love Means More is the second book in the Good Bad Idea series. This novel features a friends to lovers, fake boyfriends, bisexual awakening romance. Full of cute sweetness and sexy fun, every story ends with a satisfying HEA and no cliffhangers. Each book can be read as a standalone or as part of the series in order. 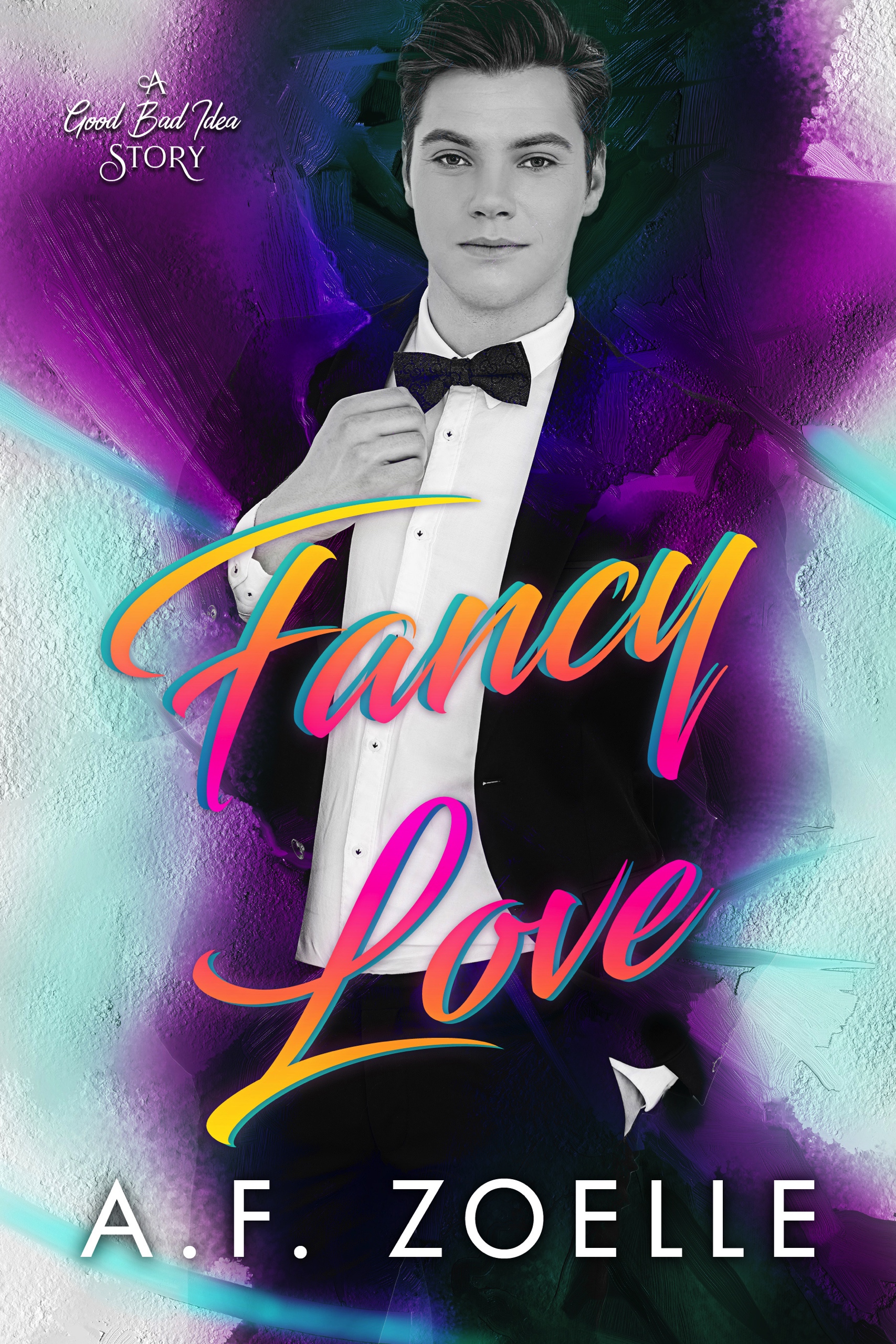 A twenty-year-old like me doesn’t stand a chance with an older playboy like Rune. Yet despite being total opposites, I’m lucky enough to call him my friend. Anything more than that would be greedy, but that doesn’t stop me from wishing he would teach me how to satisfy the passionate desire I feel for him. All of my fantasies are about experiencing my first time with him.

Could I be lucky enough that it happens for real?

The only relationships I used to be interested in were meaningless hookups with no strings attached. But Callum’s kindness touched a part of my heart I didn’t know existed, changing me forever. I desperately want him, but he deserves to be cherished by someone who thinks true love is real and isn’t a jaded thirty-year-old like me.

Can he really turn a sceptic like me into someone who believes we could have a romantic happy ever after together?

Fancy Love is the third book in the Good Bad Idea series. This novel features a grumpy/sunshine, age gap, first time, opposites attract romance. Full of cute sweetness and sexy fun, every story ends with a satisfying HEA and no cliffhangers. Each book can be read as a standalone or as part of the series in order. 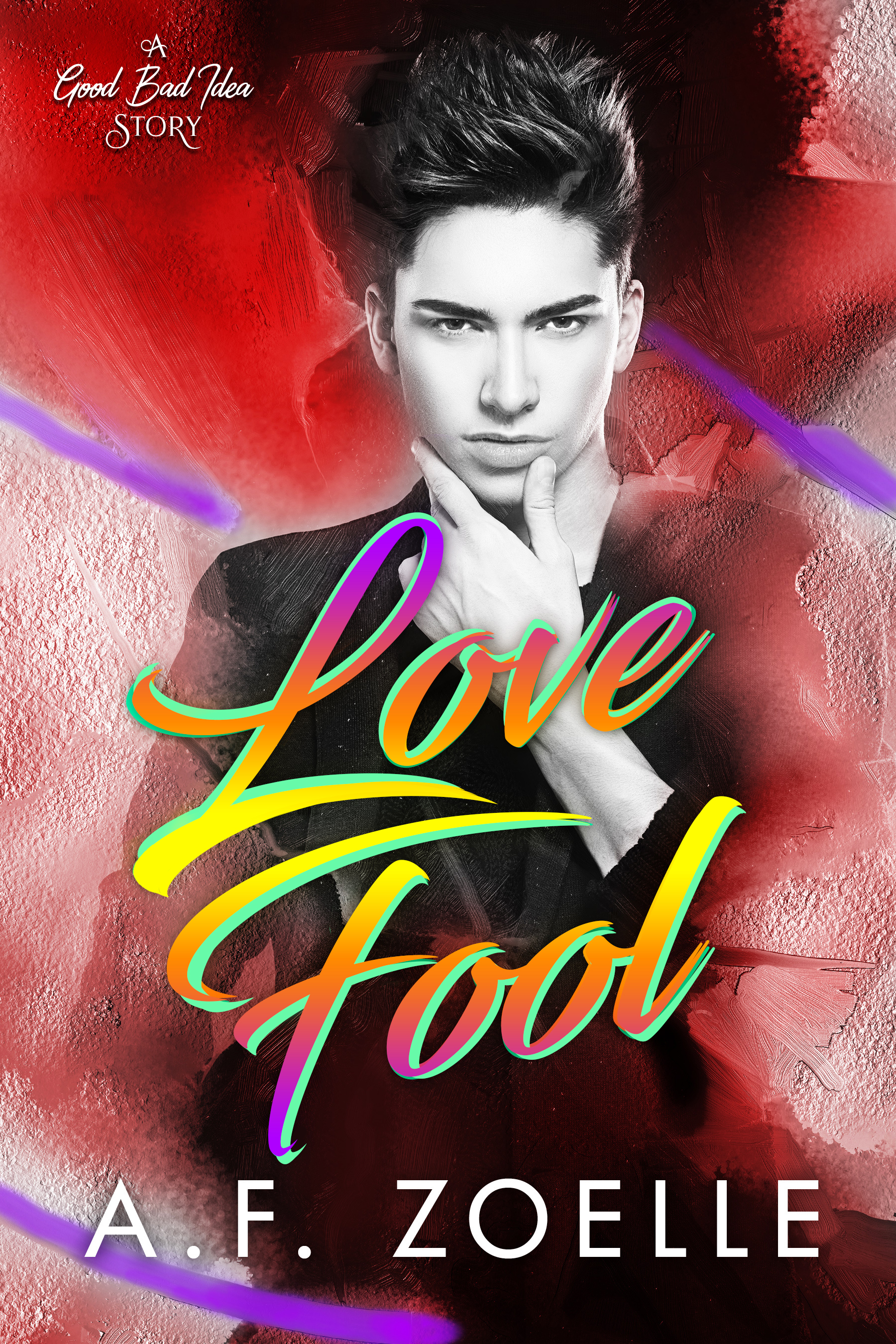 Everybody thinks my best friend is in love with me, including my cheating ex-boyfriend. When I have to see that jerk at my boss’s wedding, bringing Jules as my fake date is the perfect revenge. But why stop there? After all, if everyone is going to accuse Jules and I of being together, why shouldn’t we enjoy ourselves as friends-with-benefits?

Ohhhh, it’s because our arrangement makes me fall in love with him for real. Oops?

I’ve ignored my feelings for Xander so many years that I’m convinced I only love him as a friend. It’s totally a coincidence that thinking of him with his awful ex-boyfriend makes me burn with raging hellfire, right? When we’re fake dating, I’m obviously going to have fun teasing him with obnoxiously cutesy nicknames, like calling him my pookie—crap, I’m actually in love with Xander, aren’t I?

How do you tell your best friend, “Surprise! I just figured out I’ve been stupid in love with you forever,” without sounding like the world’s biggest idiot?

Love Fool is the fourth book in the Good Bad Idea series. This novel features a friends to lovers, fake boyfriends, banter-filled romance. Full of cute sweetness and sexy fun, every story ends with a satisfying HEA and no cliffhangers. Each book can be read as a standalone or as part of the series in order. 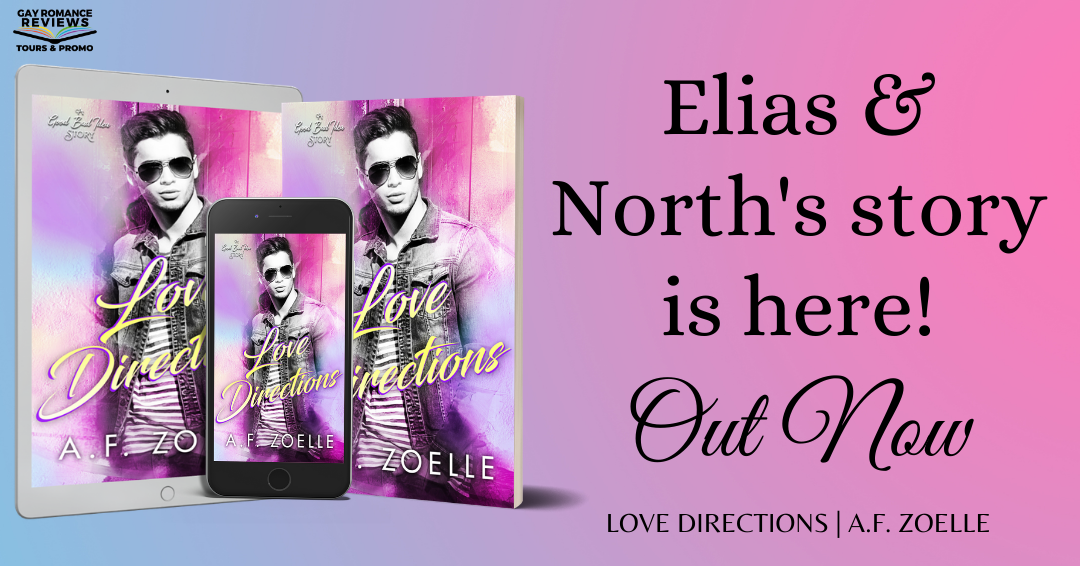 Under constant siege from persistent plot bunnies, A.F. Zoelle enjoys humoring them by writing about gorgeous men being in love. Her contemporary romances are full of witty banter, sexy fun, and lovable smart-asses. She’s left academia

behind for a new adventure, which will hopefully include adopting Ragdoll cats of her own someday soon. 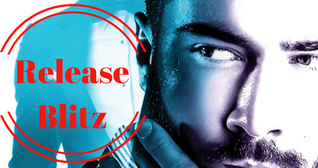 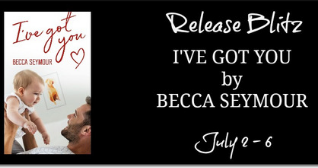 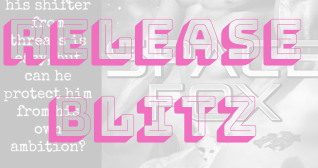