Owned by the sea – Release Blitz 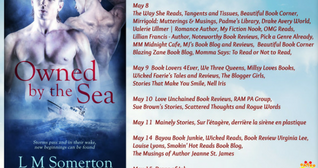 Book Title: Owned by the Sea

Storms pass and, in their wake, new beginnings can be found.

Talented young artist Jonty Trelawn paints the sea as self-inflicted punishment. For almost a year he has hidden away from life, survivor’s guilt consuming him, but the time has come to move on. He conceives the idea of a charity art auction in support of the local lifeboat station and the men and women who saved his life. He hopes the tribute to his family will release him from the sea’s invisible chains.

Carpenter Jed Curnow is bound to the water in a different way. As deputy coxswain of the Govenek, the local lifeboat, his world revolves around the close-knit crew. He thinks nothing of risking his life to save others. Saving Jonty is less dangerous but just as important to him. He wants nothing more than to give Jonty the love and security he needs.

Jed’s dominant personality calls to Jonty’s more submissive nature but will he ever allow himself to be happy? It’s up to Jed and his best friend Marmite to help Jonty put his tragic past behind him and live for the future.

Jonty stood on the swaying deck and took a last, longing glance at the shore. His stomach was already heaving and the Caroline, named after his mother, had only just left the shelter of the bay. The next three days at sea were going to be torment. He hated the annual family ritual that took him away from his painting, but his father insisted on it and, at twenty-five, Jonty still hadn’t found the courage to refuse him. Rex Trelawn, who headed a private bank when he wasn’t torturing his son, had given up on Jonty ever being a ‘proper’ sailor, so Jonty was consigned to the galley with orders to keep the rest of the family fed and watered. He dealt with supplies, stocked the cupboards and made sure the boat was ready for a short sea voyage. He was also responsible for reporting their position to the coastguard at regular intervals, which he managed between visits to the head where his stomach contents insisted on making unwelcome reappearances.

The Caroline was a forty-six footer and manageable with a crew of four. She was just big enough that Jonty could avoid his father for some, if not all, of the trip. Rex always took the wheel while Jonty’s mother and younger sister, Evie, managed ropes and sails with ease. Evie had a sturdy build and relished the challenges of sailing while Jonty favored his recently deceased grandfather, being slight and less than average height. They were a small family, just the four of them, and Jonty found it impossible to refuse the one outing of the year that brought them all together, much as he wanted to. Three days battling his father’s disappointment was not his idea of a fun time.

Jonty slipped below deck to the narrow, claustrophobic galley and began preparations for a light supper. Soup and bread, fruitcake and hot chocolate would suffice—not that he’d be able to eat any of it himself. Just the idea of food made his stomach flip over. The four of them would take breaks and sleep in shifts, sailing out past Land’s End and into the Atlantic during the night. It would be something of an endurance test but Jonty could cope with that. He kept strange hours when he painted, sometimes forgetting to sleep.

His father was first to descend into the cabin, brushing a hand through his windswept silver hair. He shed his waterproofs, hanging them on a peg before taking a seat at the table.

“Wind’s getting up, Jonathon. Be sure to check the shipping forecast later.”

“Yes, sir.” Jonty didn’t need the reminder, but said nothing. He ladled soup into a bowl then placed it in front of his father.

“No.” Jonty didn’t expand. His father knew full well that Jonty got seasick every time he sailed.

Jonty held back a sigh. He wasn’t feeling up to defending himself yet again.

“Shaw tells me your earnings are exceptional for such a young artist. He wants more work from you.”

The sigh escaped. “Shaw has no business discussing my finances with you. He’s my agent, not yours.”

“I hope you’re investing well?” Rex waved a soup spoon at him, ignoring Jonty’s objection. “I’ll have to put the rent up on Cliff House.”

Jonty’s family, including his sister who was studying at King’s College, resided in London. Jonty chose to live at the family’s second home in Cornwall where the pure light was perfect for painting. He needed a place of his own where he could cut another tie to his domineering father but somehow he’d never gotten around to house hunting. He didn’t rise to Rex’s taunt. Housing discussions were preferable to those that questioned his ‘dubious lifestyle choices’. Rex Trelawn had never quite accepted his son’s sexual orientation and it was a topic best avoided. When Jonty came out at eighteen, Evie had shrugged, his mother had wept for a while then refreshed her makeup, hugged him then commenced trawling her copious address book for prospective boyfriends. Rex had given him the silent treatment for months until Jonty’s first gallery showing had sold out. He’d proved to have some worth, so they’d reached a truce of sorts.

“It’s time I found a place of my own,” he said. “Property is a good investment these days, isn’t it?”

Rex grunted. Checkmate had been reached. Rex wanted his son as a live-in caretaker for Cliff House, a place where he had a hold on him. Rex knew it and so did Jonty. “It’s time for the shipping forecast.”

Jonty switched on the radio then relaxed into the familiar litany of strange names and wind speeds, paying particular attention to Lundy and Sole.

“It’s brisker than I expected,” Rex muttered. “Bloody weather changes on the toss of a coin. We could be in for a bumpy ride.” He cut himself a slice of fruitcake, grinning.

Jonty’s stomach did a jig. He just made it to the head in time.

An unpleasant five minutes later, Jonty returned to the cabin to find Evie swapping places with their father at the table.

“Have you been worshiping the porcelain god again, big brother?”

“The boy has a weak constitution,” Rex grumbled, disappearing up the steps to the deck.

“And he could eat roadkill on a rollercoaster without retching,” Jonty sniped. “You want soup, sis?”

“Only if you haven’t thrown up in it.” Despite her words, Evie’s smile was sympathetic.

“There’s nothing left in my stomach. Besides, you’re like Dad. You’ll eat anything.” Jonty did his duty with the soup then watched as Evie demolished the entire bowl and two sizeable chunks of bread.

“Hungry work out there.” She grinned. “Dad been giving you grief again?”

“Next year when he proposes this trip, tell him to go take a running jump off the nearest pier.”

“So says the favored child.”

“I’m straight, gorgeous, I love sport and will provide him with grandchildren. You are not straight, far too pretty for a man, refuse to cut your hair,

you hate sport and you have a talent he doesn’t, which will no doubt make you richer than him. Of course he loves me best.” She raised her mug of hot chocolate in a toast.

Lucinda lives in a small village in the English countryside, surrounded by rolling hills, cows and sheep. She started writing to fill time between jobs and is now firmly and unashamedly addicted. 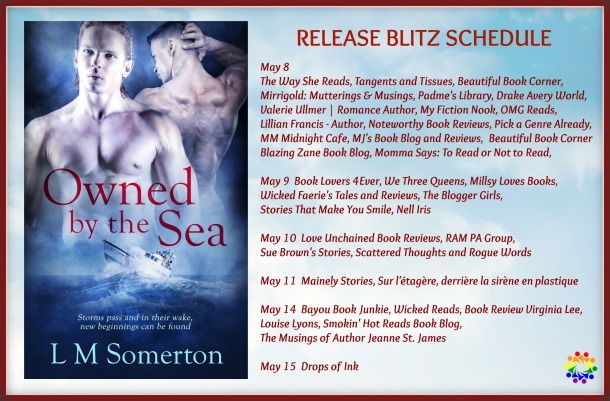 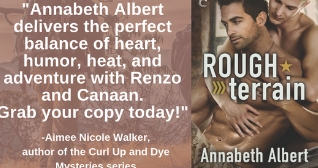 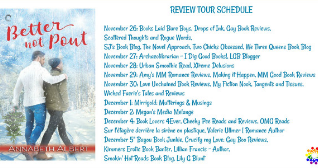 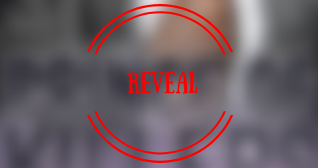